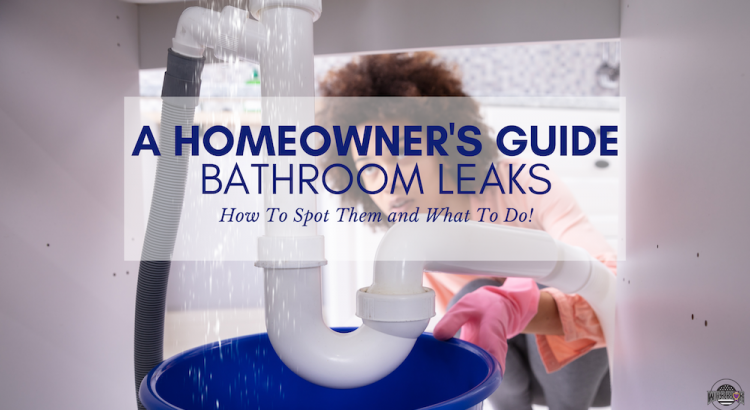 Finding a leak in the bathroom area is a common but stressful part of home ownership. Leaks can occur with the shower, bath, toilet, central heating, or other plumbing and can easily lead to an emergency situation. If addressed quickly though, many of these common leaks are simple and affordable to fix. We’ve put together this homeowner’s guide to identify the most common bathroom leaks and how to fix them before they become larger, more expensive issues.

The most common form of leak caused by a shower is a splash leak. This type of leak occurs when water escapes the shower and splashes onto the walls or floor. Although this type of leak is common and often easier to address than other leaks, splash leaks can cause serious damage to your home. Signs of water damage include peeling paintwork and rotting flooring. Water puddles on vinyl flooring, for example, can cause the flooring to curl and deteriorate to such a level where it will allow water to come into contact with whatever is underneath – usually wood. These leaks can go unnoticed until water stains on the ceiling in the room below the bathroom begin to appear – highlighting a ceiling leak.

Typically, splash leaks are caused by using a bad or ineffective shower curtain, or old and worn caulking where the shower meets the floor. Even bathrooms with shower doors can be impacted though if the gasket is damaged or the frame is dislodged. These leaks can be spotted by inspecting pools of water around the outside of the shower after use. Keep in mind that water might take several minutes to appear. You might also notice damage or molding on the surrounding floor. Depending on the exact cause of the leak, a splash leak can be fixed by replacing your shower curtain, recaulking around the shower, replacing the shower door gaskets, or having a new frame installed. If severe, you may also replace your shower entirely.

Much like shower leaks, bath leaks can have multiple causes and be difficult to find. For example, a bath leak can be caused by: a plumbing leak to the bath, a leak from the plug or waste area, a broken or damaged overflow, damage to the seal around the bath, damage to the bath itself, and a damaged area around the outside of the bath.

One of the key differences between shower leaks and bath leaks is that, in some situations, bath leaks can lead to more emergent situations because of the volume of water involved. Often, the first sign of a bath leak is a ceiling leak in the room below. You can check all areas and seals for gaps but it is often difficult to spot leaks as the pipework can be hidden behind bathroom paneling and walls. If unable to identify where a leak is coming from or help is needed, it is best to consult a Warrior professional for further inspection and to propose an estimated cost with next steps

Another common source of bathroom leaks is in or around the toilet area. These leaks are typically more unpleasant as waste/sewer water can leak causing hygiene risks and bad smells. Generally toilet leaks are caused by the: plumbing to the toilet, the waste pipe from the toilet (after flushing), the mechanism of the toilet, and from a broken toilet base.

Your toilet is probably used quite often and damage can escalate quickly to become an expensive plumbing repair job. A toilet base leak can occasionally be fixed by simply tightening the bolts that connect the toilet to the floor. But you want to be careful not to tighten too much, or you can crack the base. If that does not solve the problem, you will have to remove the toilet and replace the wax gasket that connects the toilet to the flooring below.

Inspecting and replacing the base level components of your toilet is best left to a professional to ensure the issue is resolved and no further damage is done to the bathroom. Ignoring this problem can lead to water damage in other areas of your home – especially if the toilet is in an upper floor bathroom. If the leak worsens, it may be time to replace the toilet entirely.

A bathroom leak can occur within homes that have central heating as there is often a radiator or towel rail of some sort located within the bathroom. A radiator or towel rail located within a bathroom tends to experience daily use leading to further wear and tear. In some instances, this can contribute to the weakening of plumbing joints or connections which may then leak. Alternatively, leaks can occur from the actual radiator itself causing needed professional repair or replacement.

General plumbing leaks can surface within bathrooms where there are various connections to the water system, including the above list, as well as feeds to those items. It is no secret that ignoring these leaks in your bathroom can wreak havoc within your home, causing severe water damage and mold, which often demand large and costly project renovations in the future. If you are in need of a Baltimore area professional plumber to resolve your bathroom leak, please contact us by using our form on our website or by calling us at 443-967-3736. We are here to help with our 24/7 emergency service!

At Warrior Plumbing & Heating, nothing makes us happier than to see our clients satisfied with our services.